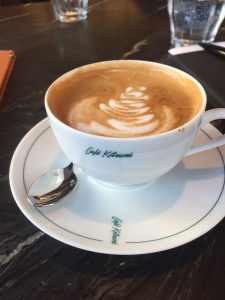 I added Café Kitsuné to the New & Noteworthy list when it opened in the West Village in mid-November. The co-founders of the Maison Kitsuné brand are Masaya Kuroki and Gildas Loaëc, who began their business fusing their loves of fashion and music, and now are exploring their interests in the food and drink world. They have opened their own roastery in Japan with another one in France in the works; and have cafes in Paris, Tokyo, Seoul, Okayama. This is their first outpost in the U.S.

Atmostphere and design: The space is well-designed, the large windows maximizing light and offers three types of seating. After my first visit, I determined the coveted table to be on the velvet banquette in the corner (though it would offer any passersby to see what you were doing). The tables are light colored and thin; the woven chairs are black and lightweight. These are both good things as they add to the airiness of the space. There is also counter seating, flanking the food-and-drink station.

Menu: The Paris-meets-Tokyo brand manifests itself on the menu with items that you would expect to want and find regarding coffee offerings (speaking for myself here) as well as pastries and small plates, e.g. sandwiches and salads. The menu is lightly peppered with dishes that make nods to Japan including azuki toast and edamame hummus.

The matcha latte is smooth with no hint of bitterness lingering on the tongue. It is served in a cup/bowl. I actually splurged and had it made with whole milk so I could not finish it as I usually do not indulge in big lattes. The flat white was made with a strong and flavorful bean–very satisfying. I am feeling good about the drinks.

After perusing the menu, I settled on the azuki bean (sweet red bean paste) with cream cheese on toast as it was a combo that I had not tried before. At first, I thought the bread was a Japanese shoku-pan or milk bread because of the square shape but in double checking the menu, I saw that it was a thick brioche toast. The heft, crunch and richness of the toast complemented the bean paste and cream cheese. It is generous in size it filled me up until dinnertime. The menu includes salads and sandwiches which I will be curious to try.

Overall: Everything I have had to drink and eat so far at Café Kitsuné has been tasty; and the service has been friendly and efficient each time I have visited. In keeping with their ethos creating a space the encourages hanging out, I never felt rushed or nudged to make my way out the door, even as seats were starting to fill. Oh, and the croissants are excellent and worth just getting a few to-go if you happen to pass by.