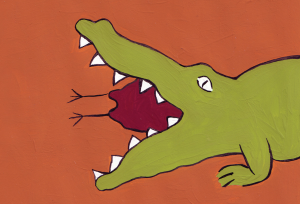 Observations from my first visit

The Grub Street article and lead photo is what had me hustle to make a reservation at Le Crocodile. The piece was about the restaurant opening and the image was of the chicken and fries plate with the headline “Together at last: Barbuto-style chicken meets Balthazar-style fries.” As if hypnotized, I went online and made a reservation.

As luck (or lack thereof) would have it, the night of my reservation saw NYC’s first snow squall. Snow and wind swirled; temperatures dropped precipitously. I wondered aloud (several times) if I should make a Hail Mary and reschedule. The weather calmed by dinnertime but it still felt bitterly cold. Still, we all trekked to Williamsburg.

Atmosphere and design:  The winter backdrop made walking into the Wythe Hotel and into Le Crocodile feel all that more cozy. Large wreaths decorated with white lights lined the windows.  Everyone seemed happy and in good spirits. I ordered a martini and oysters, and loved that the cocktail was served in a regular-sized martini glass with another pour in a glass container nestled in crushed ice.

The restaurant has been updated with a large marble bar and leather banquettes. The lighting is muted but warm.  It can be a little hard to hear when the place fills up, but it was still completely manageable (and not annoying).

Menu & Dishes: The oysters were the perfect start to the evening. I admit enjoying both a mignonette as well as horseradish sauces so it was nice to see both on the plate. All of the oysters were fresh and tasty.

Both the frisée salad with poached egg and smoked eel as well as the beet salad with pistachios and goat cheese were good. I don’t think the eel added much to the frisee salad in terms of flavor or texture–I think something crunchy would have been more welcome– but it was not a major distraction either.  We finished off both plates.

The bowl of onion soup with gruyère and lardon was yummy, though the cheese could’ve been more brown and bubbly and completely encase the bowl (as I love the ooziness and browned bits that drop down the side).

Orzo cacio e pepe was not a hit at the table. Almost like a porridge, the dish doesn’t lend itself to being spread out on a flat plate. Also, the texture was a bit gelatinous and most of it was left behind uneaten.

As for entrees, the chicken and fries were excellent, delivering on the promise of a flavorful half chicken with a light verde sauce and a humongous portion of thin crispy fries. The pork chop dish with kale, anchovies, and burrata was also very good. The pork chop was juicy but not overly salty from the brine. The kale was also tender and flavorful. But like the eel on the salad, the burrata was a head-scratcher as it lent nothing to the overall plate but this time, I think it was a distraction. I actually moved it to the side and smeared it on some bread. As for the omelette with chanterelles and lettuces , the dish gets a thumbs up. The omelette was light and the mushrooms were excellent (the only wish was for a few more of them).

The only dessert sampled was the profiteroles. The dish was fine but we left half of it behind. The chou puffs were not as tender as I like and even though the ice cream and chocolate sauce were good, no one seemed to want more than one bite.  The dessert menu is pretty large so I would be keen to try others the next time.

Overall: I enjoyed dining at Le Crocodile. The service was friendly and efficient. It just feels good to be dining there.  My quibbles were minor and I would look forward to returning and trying more of the menu.