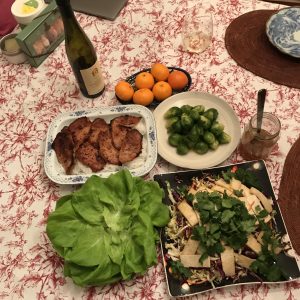 After a bit of a hiatus towards the end of 2019, Supper Club was back on our calendars for January. For our inaugural dinner of 2020, I was planning on reprising a Supper Club favorite, a Spanish bouillabaisse with lobster and clams, but upon learning a favorite seafood market was closed for mini-winter break, I somehow lost my enthusiasm. Then I saw an episode of Christopher Kimball’s Milk Street Television regaling polenta. My husband isn’t a fan so I thought about seizing the opportunity to make it outside the house. But I again lost enthusiasm as it didn’t seem so special.

I thought about the new year, and then remembered that Tết, Vietnamese Lunar New Year, was around the corner. Inspiration crept in and I started browsing for ideas.

Menu: M had recently added pork to her diet, and so I honed in on Vietnamese grilled lemongrass pork chops (thit heo nuong xa) and a crunchy cabbage salad with tofu (variation on gỏi bắp cải gà). I included rice vermicelli and Boston lettuce to make wraps, as well as a sauce/dressing (nuoc cham). I still felt like we needed more veggies so found a recipe for boiled brussels sprouts doused in olive oil and fish sauce that could fit the menu.

Drink: T’s family recently released some wines and she sacrificed a bottle for our Supper Club.

A very unfortunate accident and subsequent death of a family friend’s parent sparked conversation about our parents. The death was precipitated by a fall but complications arose from the fact that it happened overseas.

The health of our parents are ongoing concerns for all of us. There are so many parts of pieces and parts; the physical and emotional, medical and social. My parents are looking to move but the “world is your oyster” adage starts to fall apart quickly.

T recalled a pronouncement from her mother-in-law that she would be giving up travel for accident concerns and wanting to be in the care of her local doctors should anything arise. At first, the natural reply was she should not curtail her travel and that everything would be fine/okay but now we all agreed that we understood her choice. Having been in hospitals where staff rotates in and out, and in real-time emergencies, the number of cracks where the proverbial ball could drop are far too many.

Other concerns were about independence, i.e. being in a place where driving wasn’t required. Also, my parents live in a place where weather can be unforgiving throughout the year, e.g. severe rain and snow storms. And nobody wants to be too far from one’s parents.

We have been lucky where all of our parents have been relatively healthy aside minor mishaps. But we also know that the clock does eventually run out. We will keep talking about what is best for them and support each other as we can.