Labneh with Black Olives and Za’atar 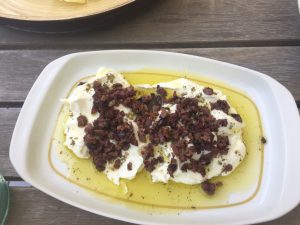 I recently met with a friend who spied a picture of this dish. I wrote about it in a Weekend Cooking post and said it was inspired from a recipe from Mokonuts on the Saveur site but did not really go into much more detail other than that it called for swiss chard which was not in season at the time and so it was omitted, plus I always use less salt than recipes call for. Having strained Greek yogurt to make spreads with other recipes, the Mokonuts version is much more flavorful by whisking in olive oil and salt. This is something I will take with me as I try other ‘add-ins’ to labneh.

Whisk the yogurt, olive oil, and salt in a bowl and transfer to a serving dish.

Sprinkle za’atar over labneh, and top with chopped olives over labneh.

Drizzle with olive oil and sprinkle salt to taste. Serve with bread.