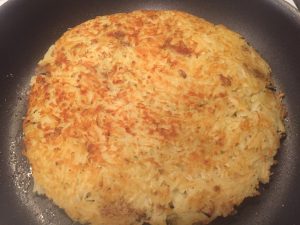 I like my hash browns to be crispy and ‘fluffy’, not ‘al dente.’ And when making them at home, I like making one ginormous hash brown. It’s easier to make, to serve, and to eat!

This recipe is flexible and hash browns are messy by nature so don’t sweat the details. I like russet potatoes but you can use Yukon gold potatoes. And then you just need a grater, a non-stick pan and a bit of oil and butter.

Put potatoes with skins in pot and cover with water. Bring to boil and cook until tender, i.e. when you can poke it pretty easily. The key is that it needs to be at least par-boiled but don’t overboil to mushy-dom.

Remove potatoes and set aside to cool.

The next step is to shred the potatoes using a grater. I like the halve the potatoes lengthwise. The skins make it easier to hold while grating. I do not grate the skins but will leave that up to your preference.

Heat a non-stick pan and add oil. Once it starts to shimmer, add butter and swirl it around. Add all of the shredded potato. I throw on some salt and pepper on the top. Cook until the bottom is nicely browned. I like a deep golden color. Sometimes this can take up to 10 minutes so be patient.

Next, take a plate and cover the potatoes, and quickly invert. Slide the uncooked side back into the pan, and again cook until golden brown.