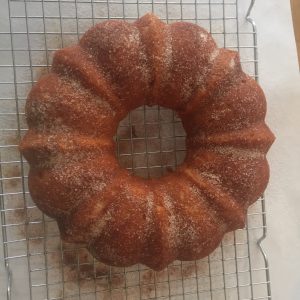 When living in Tokyo, I used to stop into Mister Donut and treat myself to an old-fashioned doughnut now and again. I recall there were several types: glazed, sugar and plain. I used to get the plain — not too sweet and the rough texture gave it a bit of a crunch.

This old-fashioned doughnut bundt cake is from Erin Jeanne McDowell’s recipe in The New York Times and is covered in cinnamon sugar (after a nice shellacking of melted butter). Making for the time time, I followed the recipe but halved it . . . just in case. Super yummy and I actually like the demi-bundt slice!