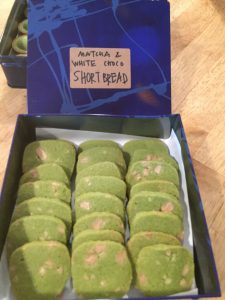 I first tasted matcha in Japanese tea ceremonies.  I was about eight years old and my mother would allow me to join her. It was how and where I understood the wondrousness of sweet (wagashi or Japanese sweets) countered by bitter (matcha tea).  I loved it. Matcha is one of the trifecta often found in Japanese desserts (along with red beans and rice in some form) and now it seems to be everywhere. There is a long laundry list of its benefits, from being dense in antioxidants including EGCg which said to contribute to cardiovascular and metabolic health.  It also has a lovely calming scent.

A friend’s birthday was coming up and I knew she and her husband enjoyed matcha, so I began thinking about what kind I should use, and what type of sweets would be best for a party. I headed over to the Ippodo Tea Shop on E. 39th Street. I was told that it isn’t worth spending a lot of $ if the intended use is in cooking and baking so I went with Hatsu-mukashi.

And after much thought, I then decided on a shortbread and some financiers–both easy to pick up and eat and hopefully a nice complement any other desserts at the party.

I used a Dorie Greenspan recipe I liked for Brown Butter Financiers and added about 1-½ tsp of matcha powder.  I buttered the pan too liberally so a brown crust developed which I was hoping to avoid to keep the little cakes cleaner looking, but the result actually looks kinda nice.

I used a shortbread recipe from Melissa Clark that is my current favorite. I added matcha and white chocolate.  I had also tested the recipe for a previous Supper Club so I knew it would work.

The baked goods were a hit and I love having some go-to recipes.

That said, I am still on the hunt for more recipes to modify to add matcha. I don’t particularly like matcha sponge cakes but I think pairing whatever it is with fruit would be yummy. Maybe a thinner cookie with vanilla ice cream and berries?