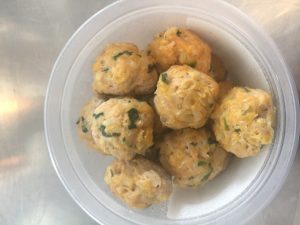 The weekend was a parade of rain clouds and sometimes just clouds.  Maybe that was why it was hard to do anything that required too much fussing, as well as fussing over.

About every six to eight days, I need to make our dog, Miette, a batch of homemade meatballs. It started when she was about 5 months old and discovering she had a bit of a sensitive stomach.  We started to keep her meals to dry food supplemented with meatballs of ground chicken, brown rice, sweet potato and occasionally chopped spinach to keep her regular. It has been working so I whip up a batch almost every week.

A hearty and comforting lunch of chili was up next. Over the years, I have tried a bunch of recipes, from regional ones like Cincinnati chili, to trying different peppers like chipotle but I think I like the straight-up ground beef chili with green peppers, beans and the usual suspect spice list like chili powder and cumin the best. Maybe it’s because I like the toppings of chopped red onion, sharp cheddar cheese and the occasional dollop of sour cream, so having the chili be flavorful but overly powerful is ideal.

Cookies were calling our name and the original plan was to make oatmeal raisin. I busily browsed for thin crispy but slightly chewy versions. On Serious Eats, I saw a recipe mimicking Tates cookies which I thought would be worth trying. I started measuring out ingredients and was actually more than halfway through before I realized this recipe was actually for chocolate chip cookies (bad tagging it seems).  So I rolled with it as I had some Valrohna chocolate chips in the pantry. The recipe called for using cane sugar and using a food processor to mix chopped cold butter chunks into the flour mixture, which is different from room temperature butter sticks and creaming it with sugar.

Like I said, I was not up to fussing too much so using  a spoon (versus an ice cream scoop) and putting one row too many on a sheet, resulted in a batch of ‘rustic/artisan’ cookies.  They were indeed chewy and a little crisp around the edges. Glad I made only half a batch which still yielded almost two dozen cookies.  They tasted very similar to Toll House cookies but maybe more flat.

Now despite using butter and eggs in this recipe, I had actually been trying to minimize dairy use as allergy season gets going. I made some almond milk to put in coffee.

Using leftovers from chorizo patatas and roast broccoli, I decided to make empanadas.  I searched high and low for a dough recipe that would not yield a tough exterior. I also did not want to use puff pastry.  I found a recipe with rave reviews with words like ‘flaky’, ‘ best,’ and ‘delicious.’ It called for vinegar which I found interesting and a few reviewers who had tried several empanada dough recipes called this specific ingredient out as being the game-changer.

I only had biscuit cutter rings which were too small so just hand-rolled out the dough and used fork tines to crimp them closed.  I also used an egg wash (some recipes called for melted butter but I worried that it would burn).

The results was a dozen of haphazardly shaped empanadas that were a tad too dry. The dough was not flaky but relatively tender.  I made up a mustard dipping sauce as well as a BBQ sauce to have something to moisten the empanadas. My husband pointed out that most of the empanadas he has had were dry so my batch fell in line with his expectations.  I was a bit bummed out as it was a lot of work, and that maybe just eating the leftovers would have been tastier than making them into fillings and making empanada dough. Lesson learned. Empanadas are not my thing.