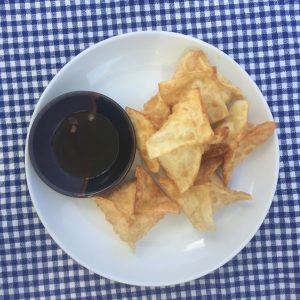 There is a Chinese-American dish often found on restaurant menus (at least in the Midwest) called Crab Rangoon, which is a mixture of cream cheese and fake crab meat (usually) wrapped up in a wonton and deep-fried. I think there must have been some herbs or seasonings as I was never a fan.

Then a friend I grew up with in Kansas City who moved to Japan was visiting and announced she was craving this dish. Her version (which I cannot quite recall) was simpler and I was hooked!

My revival includes chives as the only other ingredient to cream cheese and wonton wrappers.

Warning: they are terribly addictive so while I think four to six is plenty for one serving, you can bet that there will never been any leftovers!

Put about 1 teaspoon of filling in the center of the wonton wrapper.

Dip finger in water and wet all four edges of the wrapper.

You can make make a number of shapes when sealing the wrapper, e.g. you can just twist and make a little ‘sack or make a little square box (see picture). You should be able to make about 16 wontons. The main thing is not to overstuff the wonton or you will not be able to seal it properly, and you don’t want it to leak when frying.

Heat oil in small pot so that it is at least 3″ deep and is hot enough to deep-fry, about 350 degrees.

Fry the wontons in small batches. Do not overcrowd.

Serve with soy sauce or a sweet chili sauce.